Sander set us up with the perfect driver/guide. The lodges we stayed at were very good (except one, which we have already lodged a complaint with San..." 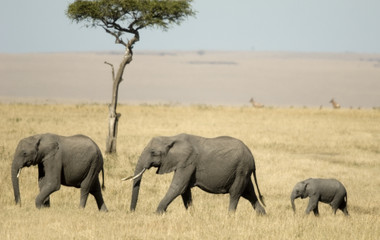 In Africa, safari is the best type of travel adventure there is.

It's something that you dream about, you read about, you research, and finally, when you think you know what you want, you book.

It’s understandable that you would want to pack as much wildlife tracking, big game viewing, bird watching, river rafting adventure into your trip, I mean, this is once-in-a-lifetime, right? But there are more than a few points to consider before you book to ensure you get the best adventure travel out of your African safari.

Do Your Animal Research

Like the big game hunters of the olden days, you must scout out your trip - Do you know what kind of animals you would like to see, and where those animals can be found?

If it’s chimpanzees you’re after, you’ll have better luck heading up to Kibale National Park in Uganda.

For Mountain Gorillas there are fewer options, as only 880 individuals were recorded in Nov. 2011. You’ll have to go to the Bwindi Impenetrable Forest in Uganda or Volcanoes National Park in Rwanda to see these elusive and rare creatures.

Time Your Safari to Perfection
The time of year you go is also critical.

While most of us are used to having a “summer” and “winter” season at home, central Africa is a different story. But don’t make the mistake of thinking this means permanent summer. In reality, there’s a big difference in the seasons, and going at the wrong time of year could either leave you high and dry or down and damp.

Besides affecting your choice of what to pack, the wet/dry seasons have other consequences. Driving times are affected, with some parks inaccessible, and the types of animals you’ll see will vary. For instance, in the South Luangwa National Park in Zambia, the seasonal change is quite dramatic.

The dry season lasts between April and October, and the driest months are when game concentrations are at their highest. The rainy season starts in September when you can see great flocks of birds moving through the region. Many of the lodges close however during the rainy season as large parts of the park become inaccessible.

Despite what National Geographic xaand the tourist brochures lead you to think, Africa is not a zoo. You can’t always count on the animals to stay where they are, but you can plan on where they might be. Take, for instance, the annual migration of animals in the Serengeti. Between July and October, over two million animals, mainly wildebeests and zebras, go in search of greener pastures from the Serengeti National Park to the Masaai Mara National Reserve in Kenya. To do so they must cross thousands of miles of predator infested grasslands and rivers teeming with Nile crocodiles and hippopotamuses. Quite an impressive display.

If flamingos are what tickles your fancy then you may want to consider a trip to Lake Natron in Tanzania. During the wet season, great flocks of Lesser Flamingos literally cover the lake like a flapping pink blanket in order to find suitable breeding grounds. Don't Try to Fit Too Much in

As excited as you may be to see ALL the animals, this might not be the most enjoyable or practical of strategies. Many of the national parks are spread out across countries, borders, and sometimes on the opposite side of Africa.

If spending eight hours bumping over rutted dirt roads in Tanzania sounds like the ideal vacation, this can easily be arranged. However, it’s far more practical to concentrate your vacation days in one area, to maximize the amount of time you have actually viewing animals, and minimize the time traveling between animals. For example, consider one camping vacation in Kruger National Park, instead of a traveling survey of all the national parks in South Africa. This way you’ll truly get to know an area, the animals that live there, and the conservation challenges they face. You’ll also lower your environmental impact by reducing your travel time; ecotourism at its finest.

Talk to a Destination Expert

Of course, this is a lot to consider. With any adventure vacation it is always advisable to speak with a local expert with years of experience in the area. Eliya in Tanzania, for instance, has been roaming the African savanna in search of Big Game for almost his entire life. He can tell you exactly when to travel, where to go, and what you’ll see at any given time of year. This kind of knowledge is invaluable if you want to get the most out of your time there (not to mention he’s one of the nicest guys we know).

Don’t miss any opportunity to make the best of your time in Africa. Know what you want to see, make a plan, consult an expert, and leave your worries in the dust.

Sander set us up with the perfect driver/guide. The lodges we stayed at were very good (except one, which we have already lodged a complaint with Sander). He answered e-mails quite quickly and took care of all our concerns. He even tried to find us an early flight out due to the virus.

Anyway as to a review, my wife and I are what I would say experienced travelers. ( Uganda was 129 countries and territories for me and number 71 for my wife)

I was impressed by Uganda, I though that the variety of wildlife and the quality of the accommodations were at least equal to Kenya and Tanzania. ( My wifeâ€™s favorite still is some of the private game lodges outside of Kruger, but I maintain that we probably saw more wildlife in Uganda.

Both the chimp and of course the gorilla trekking were really world class activities. To be face to face to a silverback is maybe like the Great White Shark cage dive off of Gansbei, RSA , but without the cage. The other wildlife was also spectacular. Humility aside, I got some nice shots in case there are any specific pictures , like Lake Albert at night with the fishing boat lights, that you could use.

I thought that the accommodations were all good. Little Elephant Camp was really spectacular and the service there was outstanding. The lodge at Buniyani Lake was also great. We are kayakers and that place has a lot of potential for sea kayak type trips. We went out in the morning and wished that we would have had more time there. Guinea Fowl is an excellent place to both start and finish the trip. The hotel at Murchison Falls was excellent as well.

City Tyson was a great guide and would rank among the best that we have ever had. He went the extra mile to help us get the best wildlife pictures and see all of the sites. He was always there when we needed something. He was clean and neat and the vehicle was suitable for the safari with the roof extension for photography. He went out of his way to get us a roadmap and outlined the route we had taken for the trip which is a great souvenir

Overall the food was good everywhere. The Bush dinner overlooking Lake Albert was outstanding and will be remembered for ever. ( It happened to have been Valentines Day )

Our trip to Uganda was to celebrate my 60th birthday with my husband and son. Prior to leaving, I was a little anxious, not really knowing what to expect. On arrival, we never looked back. The trip exceeded all expectations in every way. The 14 day itinerary Sander put together for us was nothing short of brilliant. Our driver Bob what can we say, absolutely the best and so passionate about what he does. Always going that extra mile to give us a wonderful experience. It was Bob who suggested we do the lion tracking at Queen Elizabeth which we would all highly recommend. We were so keen to see a hippo grazing in the evening at Murchison Falls Lodge that one of the workers came to our lodge after we had gone to bed to tell us he had found two.
We would all highly recommend doing the gorilla habituation program as suggested by Sander. So worth the extra cost with the money going to a good cause. The time we had with these special primates is in an unforgettable and unique experience. We travel extensively and can honestly say that this trip is the best EVER. Uganda holds a piece of our hearts, a truly special place filled with beautiful people. Look no further than Grassrootz if you are planning a trip to Uganda. Sander was always professional and so prompt when replying to any queries we had and was only too willing to assist in anyway possible, including, in conjunction with my husband, a birthday cake at Bwinfi for my actual birthday. A birthday I don’t think I will ever be able to top. Thank you Sander and Bob for the most amazing trip EVER! You just can’t beat nature!

Heike was fabulous in tailoring a trip to meet our needs. She answered every query promptly and was very reassuring. As a destination expert the trip that Heike developed for us met and needs and wishes perfectly. Our 6 day trip from Nairobi to Lake Naivasha, Masai Mara returning to Nairobi was amazing. Our guide, Kargo was wonderful and Heike planned our trip to perfection. The accommodation was spectacular. After 22 days camping we were regretting our choice of budget accommodation with Heike, but the 'budget accommodation' was amazing. The staff, rooms and food at Hotel Rudi and Mwanzo Lodge Naivasha was fabulous and luxurious. Maji Moto Eco Camp and Fisi Camp were both stunningly located and fantastic staff. We recommended Heike to other travellers before our trip began due to being so impressed with the service and our tailored itinerary and will continue to do so. The Mara was spectacular and a must destination for a Kenyan safari.